The road to good health through proper diet and nutrition can lead down many paths; you may ask yourself, should I go vegan? Follow a gluten-free regimen? Should I eat raw or cooked foods?

Spend some time in Natasha’s kitchen; it will transform your life!

Get with Natasha’s program: a vegan cookbook that provides a multi-faceted approach to health and nutrition.

Natasha Kyssa, author of The SimplyRaw Living Foods Detox Manual, offers all this and more in this inspiring collection of mostly raw, whole-foods recipes that will improve your health, no matter what your age. Natasha is a former international fashion model who transformed her unhealthy lifestyle by turning to raw foods almost twenty-five years ago; she is now a raw foods consultant and restaurateur. Natasha promotes a balanced, flexible diet designed for individual constitutions and based on fresh plant foods―gluten-free, toxin-free, and simply delicious. Her regimen also takes into consideration older folks and others who cannot tolerate an all-raw diet by including cooked foods. It’s a cookbook and lifestyle guide to be shared between generations, much like Natasha and her mother, who contributes vegan versions of central European classics like borscht, mushroom goulash, cabbage rolls, and lovage dumplings. Other recipes include raw soups, cakes, and puddings, as well as a raw Pad Thai and spaghetti Bolognese.

“So many think eating raw food is boring or bland — or just downright hard to do. But The SimplyRaw Kitchen flips that mentality on its head. Not only are the recipes in this cookbook easy for anyone to make, they’re delicious! We have a healthy love affair with this cookbook — hence the 2014 Noshies award!” 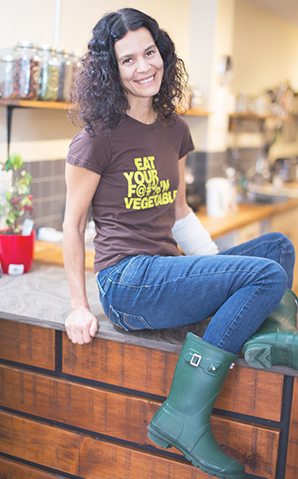